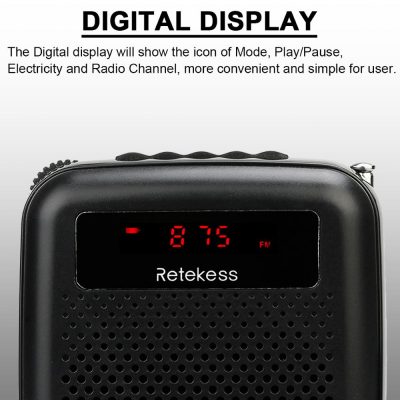 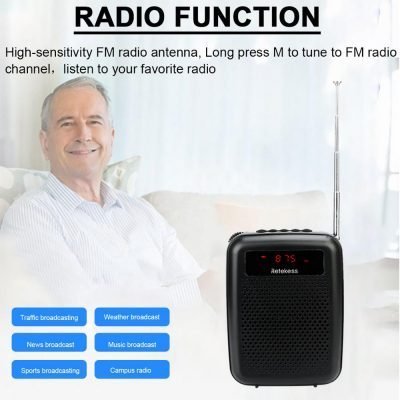 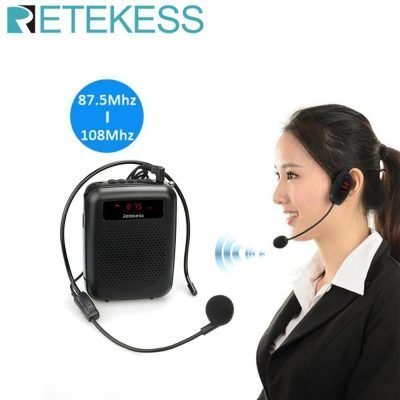 I like how easy this voice amplifier portable microphone is to use. Plug and play. I have used it in a classroom setting with anywhere from 35-50 participants and never had a problem. The sound quality is very good. Students love it. Saves on my voice. I'm happy with my selection.

Overall a pretty good speaker. No need for batteries, as this is charged with the included micro USB cord, or any micro USB cord you already have. Sound quality is great. It can play through the headset microphone that is included, though the cord could be longer. I found myself getting squaley feedback quite often because the proximity of the mic to the speaker.

It can connect to your phone or tablet for playing music through the speaker, and it connects very easily. You can play music and talk over it at the same time, which is nice. It also has play, pause, and forward buttons on the device.

Overall I like it. I got this for Boy Scout events, when an amplified voice is needed. I like it

This set was a pleasant surprise. It has a light range, so you’re not going to fill a concert hall with sound, but you could easily use it to boost the sound from the mic to a classroom, or a small outdoor group. The pack doesn’t have to be carried on you, which is good, because it’s a little bulky for the casual carry around! I wouldn’t mind a light, less bulky headset, but that’s personal preference, I think.

For what it is, this is a nice add to make sure you can be heard crisp and clear to your group! It pairs easily with Bluetooth, and there’s not much to set up and fiddle around with, so it’s very simple for even the casual user! The build and construction seem solid, so banging it around a little doesn’t seem as though it would hurt it that much! The battery life once you get it charged is pretty solid too, so an overall great product!

I was very impressed with this little PA that I have been using for my outdoor music therapy sessions since COVID hit and I was no longer able to work inside senior living communities. I wear one head set plugged directly into the PA that I wear cross body. The second headset is blue tooth. I took the mic off and tape it to my guitar as a pick up. I am able to be heard by my geriatric clients 3 stories up and 20+ feet away ground level. Sound quality is decent for the singing considering it’s designed for tour guides. Highly recommended for strolling entertainers and music therapists.

I got this to amplify my voice and electric acoustic guitar (with a Bluetooth attachment) for street performing and playing for small groups. It’s portable and easy to use. It does a good job amplifying my voice—- but is only useful for intimate settings. That being said, it does an excellent job at that. I think it would be great for a variety of uses— especially for anyone who wants to move freely (this is a wireless set up). This is a great little machine and isn’t too expensive for an amplifier! I’m super happy with it! *Thank you for reading my review. If it helped, please let me know by pushing on the Helpful button so I can keep track of my most helpful reviews. I hope you have a great day!*